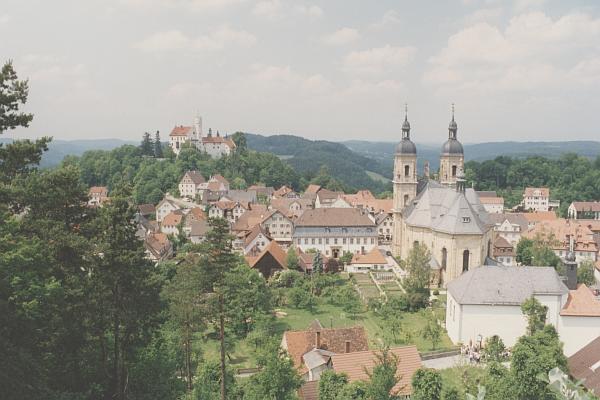 Gößweinstein sits in the middle of the Fränkische Schweiz region (Swiss Franconia), known for its scenic eroded limestone features. The village is dominated by its pilgrimage church built between 1730 and 1739 by Balthazar Neumann.

To the north-east is Bayreuth. To the west is Bamberg. To the east is Pottenstein. To the north is Sanspareil. And to the south is Nürnberg.

Click on the thumbnail to see the full photo.

Franconia, Franken, is the northern part of Bavaria. Primarily popular among German tourists, the area contains much to see and do. For instance, this area has perhaps the highest concentration of Breweries in Germany (the country with largest number of breweries in the world).

I discovered the charms of this area quite by accident during my 1986 trip to Germany. I visited Nürnberg specifically to see the Deutsches Museum. After leaving Nürnberg, I headed north to Bayreuth. and spent a day exploring the Fränkisches Schweiz.