It’s been said that the only constant is change. This truism probably goes

Back when I was in university, I was undecided what to do after graduation. I felt I should stay in school to get my Master’s degree. But I also felt I should move on. I decided to take what seemed the easier path and stayed in school. But within months, I realized I had made the wrong choice. I quit school, accepted a job at IBM Canada, and moved to Toronto. I never regretted that decision.

In 2010, my family decided to take a radical step and we moved to Kingston to be close to family. Shortly thereafter we joined the local Unitarian fellowship. It made sense at the time. We were with a group of friendly, more or less like minded people. However, as time when on and we became more involved with the fellowship, we became more and more uncomfortable. Something was changing. But it took a while before we began to make sense of it. (You can read about our decision to leave the fellowship here.)

Which brings me closer to the topic of this missive. Lately, we have been participating in one particular on-line forum on Facebook, The Gadfly Papers UU Book Conversation Group. I’ll try not to get into a lot of details, but the group reflects deep ideological differences among the Unitarian Universalist (UU) laity. Differences that may threaten the very existence of UU.

In a nutshell, the key issue is this. While it is probably a given that the vast majority of UU’s (if not all) want to see an end to racism, there is deep disagreement over how that is to be achieved. The UUA has embraced an extremely controversial theory called Critical Race Theory (CRT). It’s worth reading the Wikipedia page, especially the Critique section. One big problem with the theory is that critics of the theory are summarily dismissed with accusations of “white fragility” or being part of “white supremacist culture”. If the theory cannot be challenged, it cannot be tested, and therefore is bad science. I realize the social sciences can’t be as rigorous as the hard sciences, but I believe most researchers in the social sciences do try to make an honest effort to apply the scientific method.

Critics of CRT argue that there are better methods to address racism in society, methods that don’t alienate vast parts of society, including people who are making a sincere effort to stamp out racism. Within UU, good people have been thrown under the bus just because they disagree with the current CRT doctrine of the UUA. There is a serious chilling effect. Ministers cannot be seen as disagreeing with CRT lest they be accused of acting out of covenant. I leave it to you to decide how many of the Seven Principles are being violated by the actions of the UUA. (If you want another opinion on CRT, read A Perspective Based on 22 Years of Marginalization, by Jozef Bicerano, a UU for more than 35 years and also currently an active member of a UU congregation.)

But I don’t want to dwell on that. My point is that, for various reasons, people have left their UU fellowships (or Unitarian, in Canada). And as a result of the current controversy, more may well be tempted to leave. But as for us, we left two years before the Gadfly Papers made a splash at the recent UUA General Assembly meeting. As I mentioned at the start of this essay, people change and institutions change. Sometimes the only viable option left for someone who’s feeling unsatisfied is to leave their fellowship. 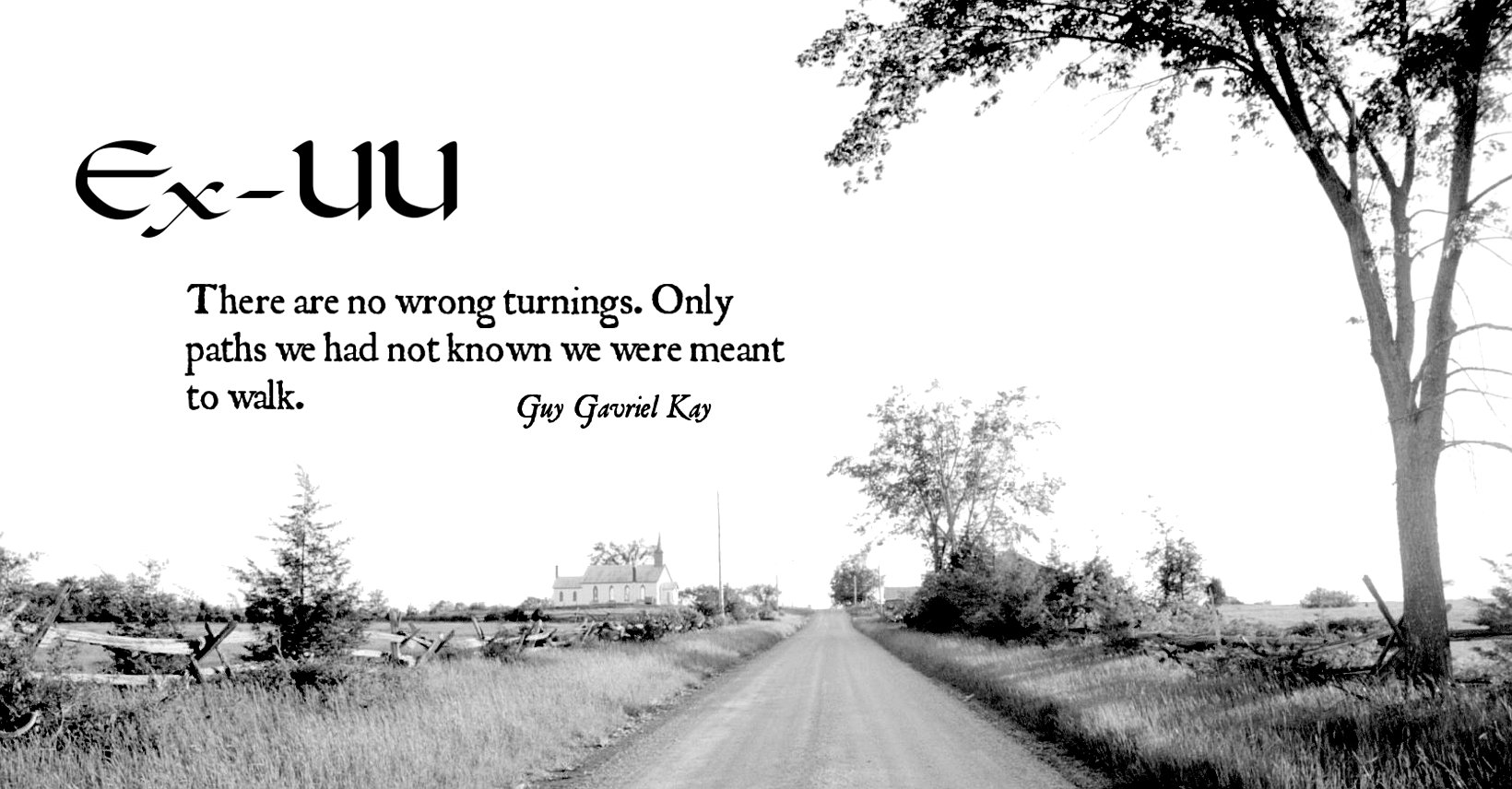 A few months ago, I jokingly suggested to someone that we needed an on-line support group for people who have left UU. As a result of the heated discussions on the Gadfly Facebook group, we decided to go ahead and start such a group. If you have already taken the leap and left a UU congregation, you are invited to join the Ex-UU group on Facebook.

Just to be very clear, this is intended as a forward-looking group. While group members may have strong feelings about their prior involvement with UU, it is not our place to engage in UU-bashing. And I want to make this clear, it is absolutely not our purpose to encourage people to leave their fellowships. Many of us still have a strong affinity with UU. As I’ve mentioned before, even though I no longer identify as Unitarian, I still have a strong respect for the Seven Principles.

We are a group of people who share our stories as we move forward in our lives. Some ex-UU’s are looking for different channels to support their humanist leanings, while others look for more spiritual outlets. There are a lot of different alternatives, such as humanist organizations or progressive Christian churches. Leaving a church can be difficult. We want to send the message to disaffected UU’s that they are not alone, and that there’s life after leaving a UU fellowship.

To further our purpose, we do try to screen prospective group members. When you press the “Join” button, you will be asked three questions: What is the name of your last UU fellowship? What year did you leave it? And do you agree to the rules of the group?

The group is simply a recognition of the fact that situations change. Some may well view the existence of the group as provocative. But I would argue that if someone sees the group as provocative, they don’t fully understand the Seven Principles. The fourth principle in particular talks about the free and responsible search for truth and meaning. If you truly accept that, you must accept the possibility that your own search for truth and meaning may well lead you away from UU. There’s nothing wrong with that.

If you are a former UU and would like to join with others, then please feel free to check out the Ex-UU group on Facebook.