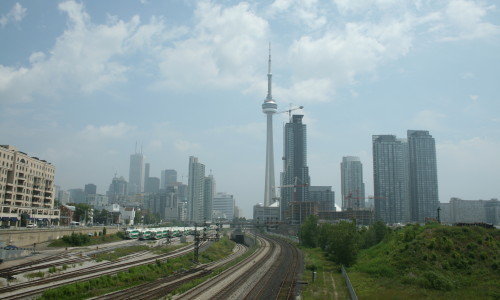 Toronto is the largest and most important city in Canada and possibly the most cosmopolitan city in North America. It is a unique mosaic of different cultures: Italian, Chinese, Greek, Caribbean, Portuguese, Indian, Polish, Ukrainian, and many others. At least 100 languages are spoken by residents, half of whom are immigrants.

Sylvana was born in Toronto and has lived most of her whole life here. For many years, she worked downtown, within walking distance of many sites pictured here. She has little respect for the downtown after dealing with the rush-hour crowds – often having to wait on the subway platform letting three or four trains pass before finding one with room.

Hans moved to Toronto in 1981 after quitting school. His last job in Toronto was downtown in the Fashion District, commuting daily on the GO train.

On these web pages, you can find our impressions of the city.

For those who wish to visit the city, some things should be noted. Toronto, like most of southern Ontario, is unlike much of the rest of Canada. Southern Ontario more closely resembles the American states of New York and Ohio. If you want to find the “Real Canada”, you need to drive further north. Two hours will get you to Muskoka, but that’s home to thousands of cottagers from Toronto, so that’s not it yet. But only three hours north of Toronto, you get into an area where you have to start worrying about where to find the next gas station. There, you start seeing landscape which is more typical of the bulk of Canada.

In the above map, the different colored spots indicate neighborhoods covered here. Click on the spot to see some pictures of the neighborhood. Or select a neighborhood from the menu above.

You can use the legend at the bottom of each neighborhood page to go from one neighborhood to its immediate neighbors. This way, you can do a virtual “walking tour” of the city.